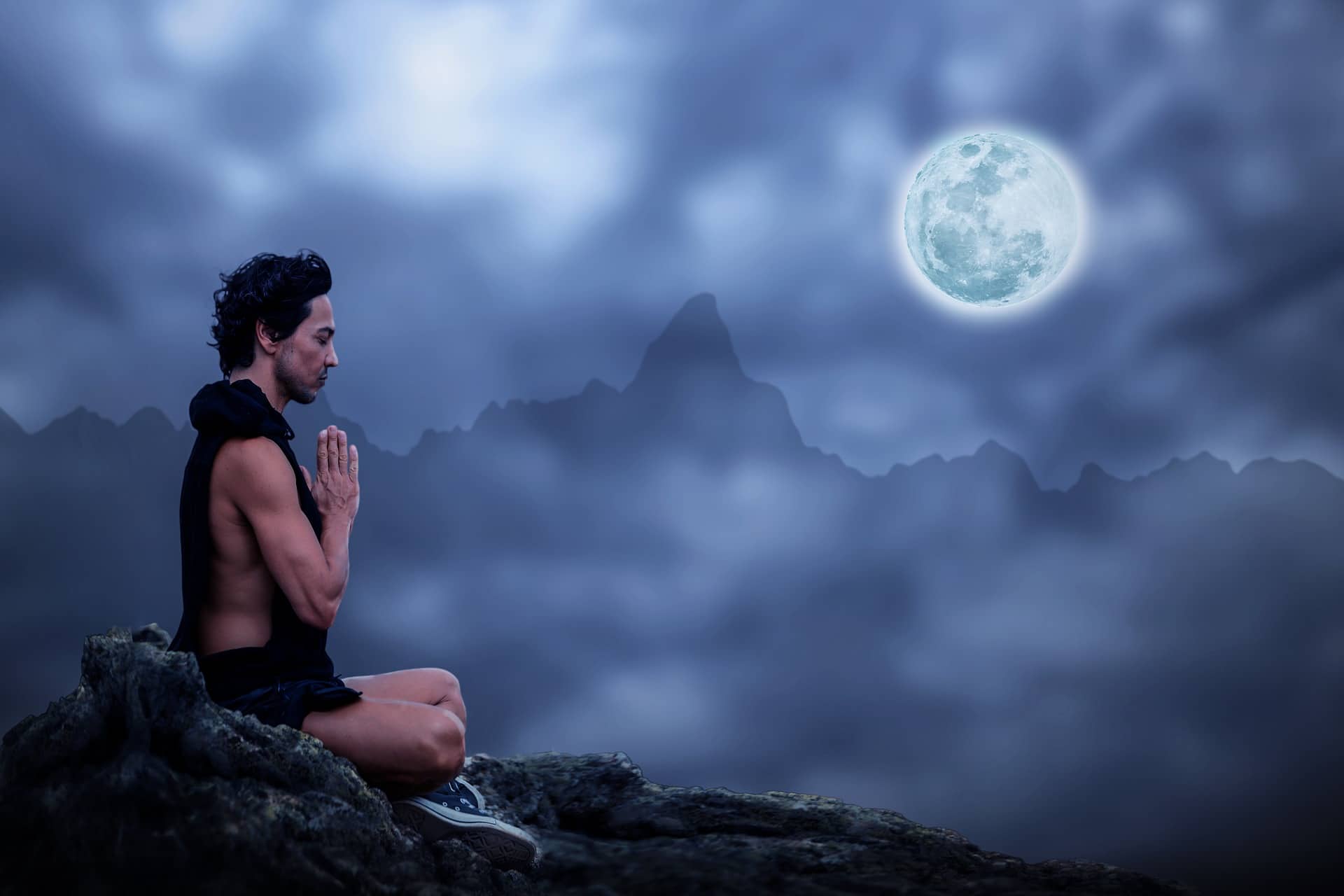 Meditation is a powerful tool of preventative medicine. It can facilitate self-healing and inspire a deep sense of well-being. In this article, you’ll learn four ways to use meditation for health and wellness. You’ll also read a profound story of how mindfulness and meditation cured one woman’s cancer.

Let’s begin with this story of miraculous healing from “Meditation: An In-Depth Guide” (Jeremy P. Tarcher/Penguin, 2011) by Ian Gawler and Paul Bedson.

In 1980, Bernice Groeke was diagnosed with melanoma in her calf which she had surgically removed. A year and a half later, doctors found melanoma in a lymph node in her groin and also surgically removed that. A year and a half after that, the cancer had spread to her lungs, at which point the doctors said that it was inoperable. They said there was nothing medically they could do for her and that she had only months to live.

Bernice decided to join a 12-week cancer self-help group. Soon after joining the group, the discussion turned to the effect of mindset on handling the physical pain and mental-emotional suffering of cancer. Bernice had never really given much thought to her mindset.

However, as the group discussed the power of mindfulness and positive thinking, Bernice quickly recognized just how negative her usual mindset tended to be. In fact, she had taken it as her duty to be on guard and to warn her family and friends of anything that could go wrong. On the flip-side, she was also quick her warn herself and others not to get too excited about new possibilities because they were likely to end in disappointment.

Bernice realized her mindset was the definition of a “glass half-empty” approach to life. So, after learning about the benefits of thinking more positively, she decided to change her habitual mindset. To do this, she decided to repeat the affirmation “I am a positive person” anytime she recognized herself going negative.

About six weeks into her new mindfulness and affirmation practice, she was sitting with her husband after dinner when she experienced one of the melanomas pressing uncomfortably against her spine. Her husband noticed her agitation and asked what was wrong.

Bernice replied, “Perhaps the doctors are right. Perhaps I’m just kidding myself. Perhaps I should just accept the fact that I’m going to die and give up on all this other stuff.” (p.275, MAIG)

Her husband was sympathetic to her pain and he was also aware of her new affirmation practice. So, instead of just sympathizing, he replied, “Oh that’s interesting. What are you?”

“Oh, I thought you were a positive person now” he said.

Bernice reflected on this and replied, “You’re right, I am.”

Bernice recalled that, as she said this, she felt a palpable shift inside her body, as if a switch had been turned on. From that moment on, she was able to see the positive in every situation.

Shortly after this inner shift, she was meditating and praying in church and had a profound mystical experience of God’s Presence in which she understood the Biblical phrase “Be still and know that I am God.” From that moment on, her faith was strengthened. She found it easier to follow through on her healthy diet and her healing efforts with meditation. She also became enthusiastic about serving others.
Within six months, scans revealed that her lungs were clear of all tumors. And, within a year, much to their surprise, doctors proclaimed her cancer-free.

Soon thereafter, Bernice volunteered to speak to meditation groups at the Gawler Foundation telling them her story. She beamed radiantly as she spoke and her enthusiasm for life was infectious. Bernice became an inspiring spiritual force.
Several years later, her husband died in his late eighties. Her friends and family wondered how Bernice would take his passing. After all, they had been together for over sixty years.

While she grieved appropriately and was deeply saddened, she surprised them with her resilience. She said, “Well, you know, it is really sad that Wain died and I will miss him terribly, but it will be interesting… I have never lived on my own before. I wonder what it will be like not having to take Wain into account anymore?”

Shortly thereafter, to help with expenses, Bernice took in a student boarder from overseas. They quickly became the best of friends. She taught him of life in Australia and he gave her company and financial support. It was a beautiful new chapter in her life.

Then, in 2009, at the age of 93, and 26 years after her cancer had disappeared-it reappeared. This time, she deteriorated quickly.

At first, she thought she was at fault. She went to Gawler to express her disappointment in herself. Gawler was quick to remind her of her remarkable recovery. For over 26 years, she had lived cancer-free. He reminded her that we all die of something-and that we don’t always know why. He also reminded her of her faith.

Bernice conceded that she had somewhat lost touch with her faith and now she had some doubts and fears of dying.

He reminded Bernice of her faith and encouraged her to imagine what it would be like to rest in the Divine Presence. He told her that “dying was easy, that she had led a good life, and she could look back on it with gentle satisfaction and no regrets. To die she only had to breathe out and not breathe in again. It would be easy.”

Supported by Gawler’s words, Bernice resolved to focus on the Divine Presence and imagine herself merging with it when the time came.

Bernice died less than a week later, peacefully. And, her funeral was a joyous celebration of her life. Family, friends, and throngs of those whom she had touched with her smiling service came to celebrate what she had meant to them.

So, what can we draw from Bernice’s story that can help us heal and be healthier?

1. Your mindset affects your ability to heal

As we saw with Bernice, her healing began with healing her attitude, her habitual mindset. She recognized her habit of looking at life through a negative and fear-based lens. She was always wary, on guard, and expecting the worst. Before attending the cancer self-help group, she hadn’t really noticed this was a mindset, or that it was detrimental-she just thought she was being conscientious, responsible, and careful.

Bernice learned to change her mindset by affirming, “I am a positive person.”
Now, having a positive mindset is not about making things up or making things better than they really are. It’s about noticing the opportunities that are present in every situation. It’s about seeing what can be done rather than focusing on what can’t. It’s about being present with “what is” and noticing what you can do to move things forward in a good direction.

When you do this, you open yourself to a wider scope of possibilities and become more inspired to take positive action.

2. The choices you make matter

As you open yourself to a wider scope of possibilities, you realize you can choose to take actions that make a positive difference for yourself and others. Things are not “just the way they are,” they are the result of a series of choices that combine to create specific results.

Meditation supports a state of clear seeing in which you can recognize options and make good choices. Through meditation, you become more able to choose what works and let go of what doesn’t.

As Bernice opened to the possibility of healing, she began to make different choices. She chose to say her positive affirmations to reset her mindset. She adopted a healthier diet. She meditated daily. She increased her efforts to serve others. She widened her community.

In time, these combined with other unseen forces to create healing.

One of the most important things you can do to facilitate healing-whether it’s physical or mental-emotional-is to activate your body’s natural relaxation response.
When you are in stress-mode, over-busy, and over-whelmed, your body restricts energy flow to digestion, immune, and higher-thought processes. Your sympathetic nervous system directs all energy outward and you lose your ability to absorb nutrients, repair your cells, and make good choices.

Our bodies are made to alternate between periods of activity and rest. Most of err on the side of too much activity. We rush from one thing to the next and don’t allow ourselves time to consciously process the events of the day. Then, we spend our sleeping hours actively processing life in our dreams. This hinders deep rest and recovery.

When you consciously relax, using a tool such as meditation, you activate your parasympathetic nervous system, your natural recovery and repair mode. This brings digestion, immune, and higher-thinking capacities back online. You also begin to process and integrate the events of the day, and of your life up to now, so you can let the past go and be more present with what is.

For these reasons, it’s vitally essential to consciously activate the Relaxation Response at least once a day using a tool such as meditation for at least 10-20 minutes.

Bernice had a strong faith in God. Because of this, she found it quite helpful and healing to imagine herself immersed in the Divine Presence. This soothed and comforted her. Her faith also prompted her to take other healing actions, serve others, and build community.

When we think only of ourselves and our own suffering, it’s easy to get bogged down in feeling “Woe is me.” Widening your vision to realize your Oneness with the larger field of Life inspires and heals. Health and healing occur naturally as a result of the Universal Life-Force flowing strongly and smoothly through your whole being. Meditation is a powerful way to mindfully recognize blocks to this flow, release them, and center into this deeper enlivening Presence.

Kevin Schoeninger is a writer and teacher of Mind-Body training, including Mindfulness, Meditation, Qigong, and Reiki. He is the author of the book “Clear Quiet Mind” and numerous guided meditations and programs in the field of personal empowerment and spiritual growth.