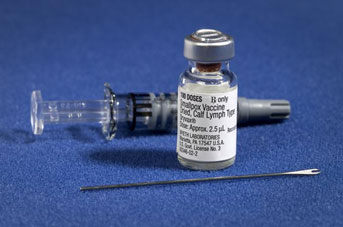 Smallpox also known as Variola, is an extremely deadly and contagious virus. It is an airborne disease that spreads fast by direct contact with smallpox virus infected bodily liquids or by sneezing or coughing.

Once the incubation period of smallpox virus is over, symptoms like pain in the abdomen, chills, high fever, severe pain in the back, headache and vomiting is experienced. After 2-3 days the symptoms go way, and rash may appear on the body. Till the rash disappears, the infected person is termed as highly contagious.

After two days the rash develops into pus and fluid filled abscesses. The abscesses then break open, a scab is formed and when the scabs fall off pit mark scars are left behind. The person continues to remain contagious till the scabs fall off.

No known cure is available for smallpox. In 1949 a case was reported last in the United States. Vaccination programs took place all over the world to eradicate the virus. For humankind it has been one of the most devastating illness since ancient Egyptian times. History books are filled with pages reporting huge death figures from smallpox epidemics.

In 1758 the first vaccine for smallpox was created but for another 200 years the diseases infected and killed people. Infection rate slowed down after a strict vaccination standard was implemented by the World Health Organization. In the 1977, in Somalia the last natural smallpox case had occurred.

For research purposes, smallpox virus stashes are still kept by health and government agencies. Smallpox was eradicated completely by WHO by 1980 and the vaccinations are no longer given to people. The vaccine is given only to those with high risk of exposure to smallpox as it can have fatal side effects potentially.

The only way of preventing smallpox is administering the smallpox vaccine and that too within 4 days of exposure to the virus. Severity of the symptoms can be significantly lessened and the disease prevented if the vaccine is given.  Some protection against the disease and severity is lessened if vaccination is done 4-7 days after exposure to the virus. Though smallpox has been eradicated completely, only researchers working with the virus in laboratory settings are at risk. To reduce infections of smallpox virus, antibiotics are also given.